Woodland Caribou Park is 450,000 hectares of Ontario northern wilderness "where nature still rules" and is so remote that canoe trippers and sport fishing enthusiasts can penetrate its interior and reach its backcountry campsites and outpost lodges only by water or by air. This weathered Arctic watershed has one of the largest herds of woodland caribou south of Hudson Bay. This area once travelled by fur traders, has ancient pictographs, howling wolves under starry skies, soaring eagles, solitude and adventure.

The Park offers 1,000 backcountry campsites which belong to a policy of pack-in/pack-out. The visitor is not to leave a trace of their passage. Every bit of debris, every scar is an affront to the natural landscape. Campers are to use known campsites, existing fire rings, or better yet, gas stoves. Structures such as lean-tos, tables, and benches are not allowed to be constructed at campsites or any where else in the park interior. 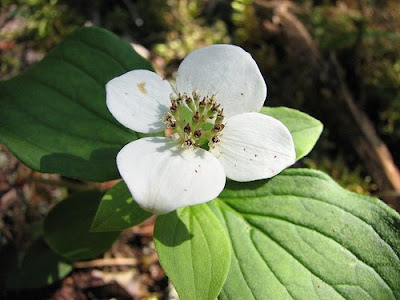 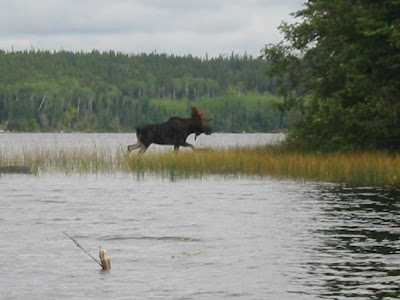 Anglers travel to this wilderness park for sport fish such as walleye, northern pike and lake trout. The fish quality is excellent, as is the fishing action. Live bait can be used but is not necessary. 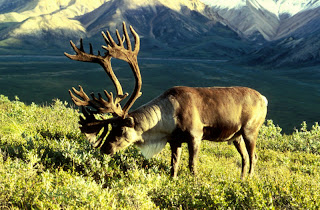 Animals in this park are typical of the boreal forest and more western habitats. They include woodland caribou (pictured left), moose, black bear, beaver, otter, muskrat, mink, martin, fisher, wolverine, weasel, lynx, fox and timber wolf. Other inhabitants include green frogs, snapping and painted turtles and 100 species of birds, including bald eagles (photo below), ospreys, terns, pelicans and great blue herons. The park's elusive woodland caribou herd and a colony of prairie Franklin's ground squirrels are found only in this region of Ontario.

The bald eagle is a very skilled hunter and feeds predominately on fish. It is renowed for stealing fish from Ospreys and will congregate near spawning runs which are easy targets. This eagle was endangered in the 1970s but the banning of pesticides and introduction of conservation programs have increased its population. It builds its eyrie from sticks in a tree up to 150 feet from the ground and near water. It returns to the same one each year, adding to the structure and weight: some nests have been known to weigh up to 1000 lb.

This area represents a vast unspoiled wilderness, yet it is within easy access of northwestern Ontario, Manitoba and the US Midwest.


Research: OntarioParks.ca
Ontariotowns.net/redlake for directions.
Ontariossunsetcountry.ca
A Field Guide to the Birds in North America by Michael Vanner
Photo Credits: [1][2][3] by greenbroke CC=flickr.
Woodland Caribou by Wikipedia
Bald Ealge from Wikipedia
Posted by Barbara Martin at 23:15

Wow. Gorgeous. I'd love to camp here. I'm so glad they have those rules about contaminating the environment with new lean tos etc

It looks gorgeous! I'm glad there are still places like this where nature is undisturbed.

Less easily reached from New Zealand, but one of these days....

Charles, yes, it is nice to know there are provincial parks where the wilderness is to be left as one finds it. This allows the natural inhabitants to exist so future human generations may enjoy them.

Linda, it is very important these wilderness areas be maintained as they are. It will be only a matter of time if these areas are stripped of their inhabitants, for humans to follow suit into extinction.

Steve, dreams can become reality. I, too, would love to visit New Zealand but for the distance.

Perhaps you will join in on My Town Mondays and post something of your location.

I'll be there next week.

Travis, be careful. You could get your wish. The temperature in Red Lake, Ontario (where you'd have to go to, to get to Woodland Caribou Park) is 64 degrees F tonight with a little cloud cover. Definitely cooler than Amarillo.

Thanks for dropping by my blog, Barbara. I absolutely love your pictures. Would like to see Toronto, sometime. Been to Vancouver & Whistler several times and would like to retire there but with housing so expensive I may have to be happy with --Home on the Range in Texas. Blah!

Debbielou, I too appreciate the pristine wilderness. It's like stepping back in time before others visited.

Katrina, welcome and visit anytime. I'll be posting about the rangeland in Canada, southern Alberta and Saskatchewan in the near future. It makes me think of Angus beef on the hoof.