In July 1874, Samuel Steele began his trip west in service with the North West Mounted Police from Manitoba. 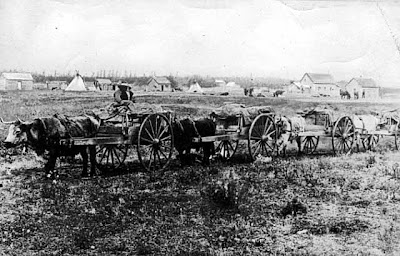 The cavalcade that left Manitoba had assorted wagons, Red River carts, oxen, cattle, farming equipment, provisions and horses. Steele’s group under Inspector Jarvis left the main force at La Roche Percée (west of Estevan, Saskatchewan in the Souris River valley where there is a National Historic Site, 254 miles west of the Red River) to travel to Fort Edmonton via Fort Ellice and Fort Carlton, a distance of 875 miles by trail. The Assiniboine nation lived in Roche Percée in the 1700s and ate the wild plums that grew there. Before the arrival of the European settlers the area was known as a battleground. The NWMP continued their journey on August 3rd making their way to Fort Ellice, a Hudson’s Bay Company post, located on Beaver Creek near the confluence of the Assiniboine and Qu’Appelle Rivers. The wooded countryside before La Roche Percee changed to undulating grasslands which improved the horses’ and cattle’s health.

Fort Ellice was reached on August 14th (near present day St-Lazare in west-central Manitoba just east of the Saskatchewan border), 130 miles from La Roche Percee. It had been built in 1831 by the Hudson’s Bay Company in an area known as Rupert’s Land, and was on the Carlton Trail that ran from the Red River Settlement to Fort Edmonton. The fort was a large fenced enclosure with dwellings and stores, located on the bank of the Assiniboine River several hundred feet above, surrounded by bluffs of aspen and poplar. Steele noted the valley was more than a mile wide, partly timbered with meadows on which large herds of ponies and cattle were grazing. Their own horses and cattle were turned out on the flats, where the troops soon learned there were quicksand traps in many places and had to rescue their animals on several occasions.

When they left Fort Ellice on August 18th, they left behind the quartermaster, sick men, half the cows and calves, some provisions, stores and several horses in poor condition. Map of northwest portion of NWMP journey.

While they traveled it was noted that prairie fires had damaged the poplar groves in the grasslands. The aboriginals and half-breed buffalo hunters would set the prairies on fire so the buffalo would come to their area for the rich, green grass that would appear in the spring. There was a scarcity of trees except where the lakes and creeks were numerous, due to the country being burned every year.

On their journey they met groups of red river carts driven by hunters, freighters and traders with buffalo robes, dried meat and pemmican. Steele describes pemmican as being “a stew of pemmican, flour, wild onions and preserved potatoes”. The aboriginals made their pemmican with strips of buffalo, deer, caribou meat that was dried and smoked over a fire, then later pounded into flakes, then mixed with fat from bone marrow and either Saskatoon berries or Chokecherries. The heated mixture was poured into buffalo hide bags of 45 or 90-pound capacity. The quantities were made to last from a season up to four years. ParksCanada mentioned that pemmican was not often offered at trading posts as a product. 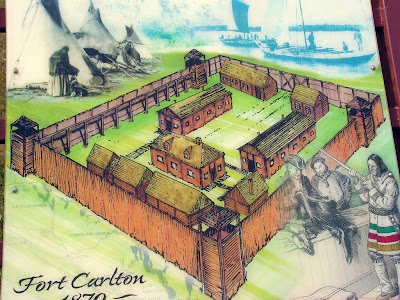 Eight weeks later, weary of making eight miles per day on diminishing rations, they arrived at Fort Carlton (located near what is now Duck Lake, Saskatchewan and where there is a provincial historic site) for a week’s rest. 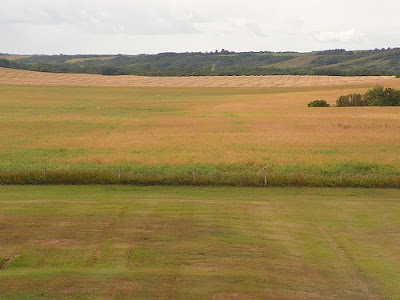 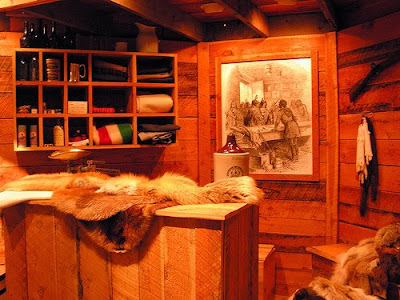 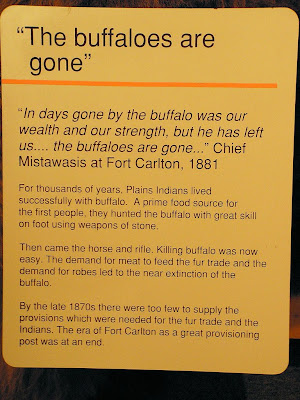 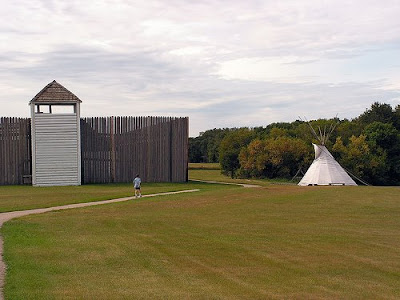 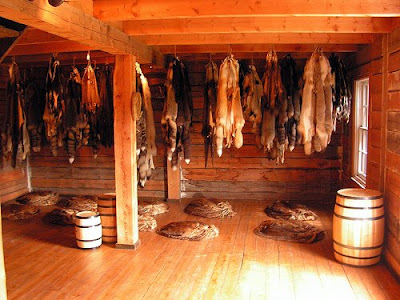 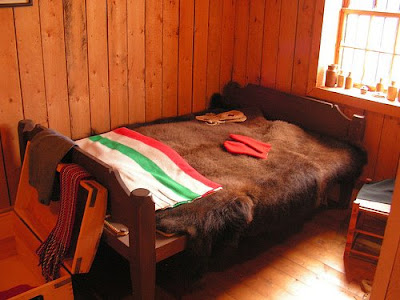 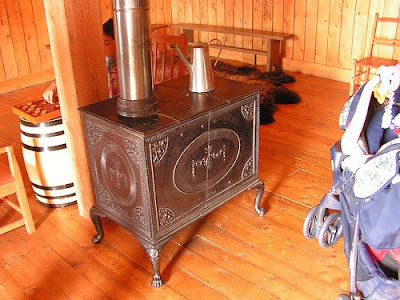 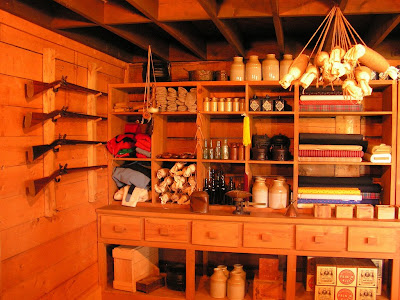 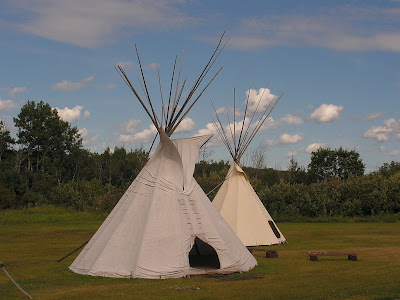 For previous posts on this series: Part 1, Part 2.

Travis Erwin from Amarillo, Texas is the founder of My Town Monday. For other locations to visit please go to Travis' site here.
Posted by Barbara Martin at 20:13

Fascinating post, Barbara. I love the pictures of the historic site at Fort Carlton. It's so sad how they hunted the buffalo into near extinction.

I love the maps of such places. It just engages my imagination so much. And the pics tell me what things really looked like. That's a cool general store.

Thank you for telling us another part of Canadian history I at least didn't know. The combination of old photos and maps with pictures and modern vistas made it even more interesting.

You have outdone yourself today. I hope you continue with these lovely posts.

What a beautiful and in-depth post. I learnt so much from reading it and that first shot of the prairie is wonderful. Many thanks.

Incredible. And lovely pictures too.

We don't have open places like that much in Michigan. Most of it is (and was) trees.

I could get so much writing done in that cabin. Thanks for the tour, Barbara :)

Teresa, there are two subspecies of bison: plains and wood. About five hundred bison survived the hunting during European settlement of the interior of North America in the 19th century. Of those survivors there were populations that had genetic variation. It was through protective legislation, efforts of public and private interests that has resulted in a current population of more than 500,000 bison in North America, from northern Mexico to Alaska. Of this number, more than 95% of bison in North America are privately owned with most slated for commercial production. Unfortunately there are those producers who have crossed bison with domestic cattle to create improved domestic range cattle.

Of the free-ranging plains bison in their original locations there is one in Mexico, two in the USA and two in Canada. The wild status of the wood bison have eight free-ranging populations with a restoration effort ongoing in Alaska.

Charles, more information for fiction writers to use. I like to add photos and maps to any historical post or article I write to add emphasis and awareness to the reader of the hardships encountered in those early days. We take so much for granted with the modern conveniences, and if anyone was put into those living conditions they would find it difficult, though some would be able to cope.

RuneE, some of the earlier history books had few illustrations which I found very dry reading. I try with my posts to find photos that have little modernization in them combined with a more natural look to the landscapes, as many areas in Manitoba, Saskatchewan and Alberta have had their forested areas above the prairies removed for agricultural purposes: growing wheat, oats, barley, hay, flax and rapeseed. It is only upon reaching the boreal forests where the land is unsuitable in places for clearing to grow other crops.

Patti, I will be keeping Mondays for my history posts despite my need to get my novels, short stories and articles out.

Cuban, the coulees in the flat prairie landscape provide shelter from the winds that blow, sometimes bringing storms. In southern Alberta and Saskatchewan there are no trees unless they have been planted by settlers and farmers. The Pronghorn Antelope that populate this area blend so well into the landscape they are 'invisible'. While driving once to Medicine Hat in southern Alberta I caught movement out of the corner of my eye, looked to see bounding shapes running from the side of the highway.

Clair, North and South Dakota, and Montana still have wide open prairies. On one drive through Montana near the Little Bighorn Battlefield Monument, on a hillside next to I-90 the native grass had been allowed to grow to its natural height. Waves of wind made the grasses undulate by its passing. I stopped at a pullover, made my way to the barbed wire fence where the grass stood above my shoulder (I'm nearly six foot). I had read somewhere the prairie grass was taller than the height of a man, where the buffalo had not grazed it to the ground.

L.A., I think I would find my mind racing at the possiblities of varied plots.

What an interesting fort. That's interesting that they used to burn the grass to get the buffalo to graze over towards a certain area.

Lauren, the aboriginals must have noticed that the new grass came up lush and green which attracted the buffalo into those areas.

PS : Thank you for voting for us Barbara, appreciate your support...Thomas

So interesting. That stove is gorgeous!

Thomas, thank you, and you're quite welcome for the well deserved vote as your blog has a wonderful collection of flora and fauna photos.

Bindu, cast iron stoves made circa 1904 had a back with overhead cabinets and doors in the front to compartments that could be used as ovens. I will see if I can locate a photo of one for a future post.

Great MTM post, as usual. I've always wanted to visit Sask. For a while, my cousin was dating a girl from there and I was hoping for a wedding. Which would've given me a great excuse for a trip!

Thank you for the interesting post and written in a very great style.

Barrie, you can still go for a visit as there are many different areas that might appeal to you.

Wil, I'm pleased to hear you liked it.

Oh Boy! I would love to visit Fort Carlton! I have always been interested in this part of american/canadian history...
:))